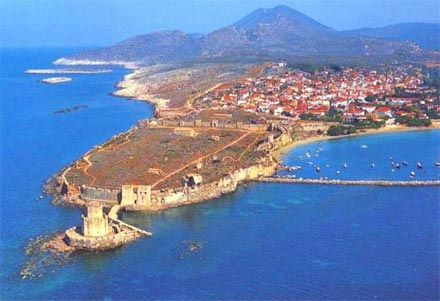 HISTORY
Methoni is a village and a former municipality in Messenia, Peloponnese, Greece.
Methoni has been identified as the city Pedasus, that Homer mentions under the name "ampeloessa" (of vine leaves), as the last of the seven "evnaiomena ptoliethra", that Agamemnon offers Achilles in order to subdue his rage.
Pausanias knew the city as Mothone, named after either the daughter of Oeneus or after the rock Mothon, which protects the harbour.The town is also known by the Italian name Modone, as it was called by the Venetians.
During the Byzantine years it continued to remain a remarkable harbor and one of the most important cities of the Peloponnese. The Venetians fortified Methoni, which developed into an important trade center with great prosperity. Methoni became the important middle station between Venice and the Holy Lands, where every traveler stopped on their way to the East. Conquered by Ottoman Turks and Venetians again and again , was finally liberated in 1828.

LOCAL FOOD AND PRODUCTS
In Methoni, as in the whole Messinia, you will find a wide traditional cuisine and many fresh local products.
The main agricultural products produced in Messinia are olives, grapes, raisins, figs, citrus and vegetables. Some of the unique flavors of the local cuisine is salted products, the stew goat, the fried cod with garlic mashed Potatoes (skordalia), the roast pig (gouronopoulo) and the unique, for taste and quality, sausages smoked with sage. Try the traditional folds with honey, Lalagia and Oil cookies. Do not forget to buy the famous Kalamata olives, honey, that are of excellent quality, pastels, ouzo, balsamic vinegar, trahana (frumenty), traditional handmade Greed pasta with fresh eggs and milk (hilopites) and herbs.

CULTURAL EVENTS
Many cultural events are organized in Methoni throughout the year.
CLEAN MONDAY: Koutroulis' Wedding
A local tradition in Methoni involves the annual revival of an actual 14th century wedding, which became a legend not only because of the many years that passed before the couple could tie the knot but also the unprecedented festivities that followed. From that time on, such grand and exuberant celebrations came to be described as being "like Koutroulis' wedding"
The feast of Methoni: Meet a traditional custom that takes place every year in Methoni.
Music and Theatre nights are taking place at the Castle of Methoni during summer.

METHONI
The picturesque seaside new town of Methoni, also known by the Italian name Modone, as it was called by the Venetians ,with its low stone homes, one beside the other, with their lovely patios and fragrant flowers, will charm you and invite you to enjoy its beaches, cafes and restaurants. Visit the famous Castle of Methoni .As soon as you cross the stone bridge with its 14 arches, flirting with the swell, you’ll be impressed by the castle and its imposing gate. A second and then a third gate lead you to the inside of the castle, where there was once a settlement. Among its remains is the pretty church, Transfiguration of the Saviour (Metamorphosis tou Sotiros), the Turkish Baths (that date back to the 19th century), the house of Ibrahim Pasha of Egypt and the Bourtzi (that was rebuilt by the Turks in 1500). It was originally built in the 13th century by the Venetians.

BEACHES
Methoni is surrounded by fantastic beaches, like Akritika and the sandy coast near Phiniki. Extended smooth sandy sea shores, swimming in crystal blue waters and enjoying the sun sinking in the sea during sunset are only some of the highlights of the area. There are wonderful sandy or pebbly beaches with blue, crystal waters near Methoni, It is ideal for those who seek quality and calm holidays as also is the quite pebbly beach in Lambes, in Loutsa and Tsapi, where you can enjoy the smooth sand and the light green clear waters.

Driving towards Pylos, you can find a magical beach in a small shallow bay, called Papa or Limna (Lake). You can swim, sunbath or even go fishing. If you prefer some place more busy and active, you should visit Mavrovouni beach which is huge and organized. There are schools for water sports, camping, taverns and cafe. 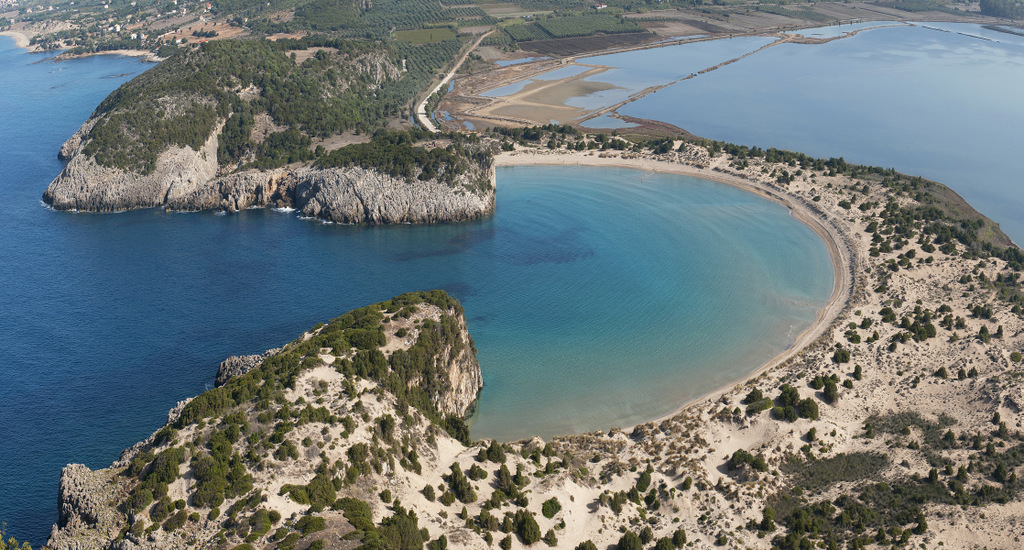 VOIDOKILIA - 25 KM
Images of the beach under Paleokastro, with its famous bay - shaped in a perfect semicircle - have travelled the world. Incredible turquoise water and fine white sand, hidden in which you’ll find beautiful seashells.

FINIKOUNDA - 9 KM
Be sure to include Finikounda a picturesque fishing village, on your route and stop for lunch or a coffee. Situated on a sheltered bay, surrounded by sandy beaches with shallow waters, it is ideal for families with small children. Its name derives from the Phoenicians who had trade links with the region. According to Pausanias it was a trading post founded by the Phoenicians, who named it “Finikous Limen” (Finikous Harbor) while the modern village was developed by Cretan immigrants around 1840. The settlement preserves its architectural character with the narrow streets leading to the large square, where is the harbor. Around the square and higher on the right side are taverns and cafes. On the left side lies the beach with fine colored pebbles.. 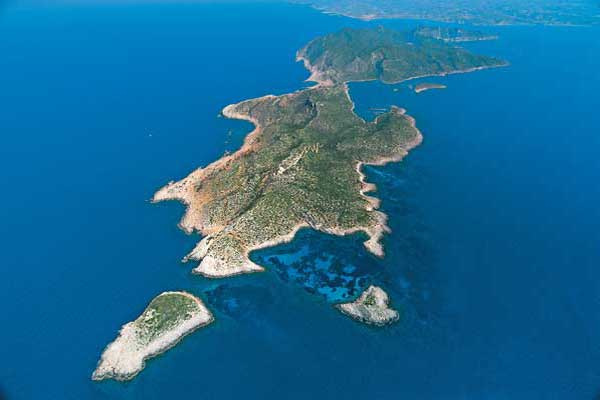 OINOUSSES ISLANDS
Off the south coast of the southwesternmost point of Messenia lie the Messenian Oinousses islands. The largest of these are Sapientza, Schiza and Amargiani or Agia Marina. The small island Sphacteria closes off the bay of Pylos. All these islands are all uninhabited but feature very prominantly in Greek history because of the many naval battles and shipwrecks here. The Spitha lighthouse on Sapienza was built in 1892 and has been automated since 1989 which made the island's human habitation unessential. Sapienza is rich in wildlife both on land and in the sea and is also used by the

Nestor Institute, based in Pylos, for its studies in astrophysics, oceanography, siesmology and marine biology and it's on-going search for nuetrinos. There are a couple beautiful beaches on Sapienza and there is also an underwater archaeological park where local fishermen found a large number of granite columns and sarcophagi from what was assumed to be a ship that has been carrying antiquities from the city of Caesarea in Palestine.

PALACE OF NESTOR - 28 KM
The palace is the central building of a Middle Helladic era settlement belonging to Homer’s Nestor surrounded by a fortified wall. The palace was a two-storey building with store rooms, workshops, baths, light wells, reception rooms and a sewage system covers an area of about two hectares and is perhaps the best-preserved Mycenaean palace in the Peloponnese identified so far. Notable finds include tablets with Linear B texts. 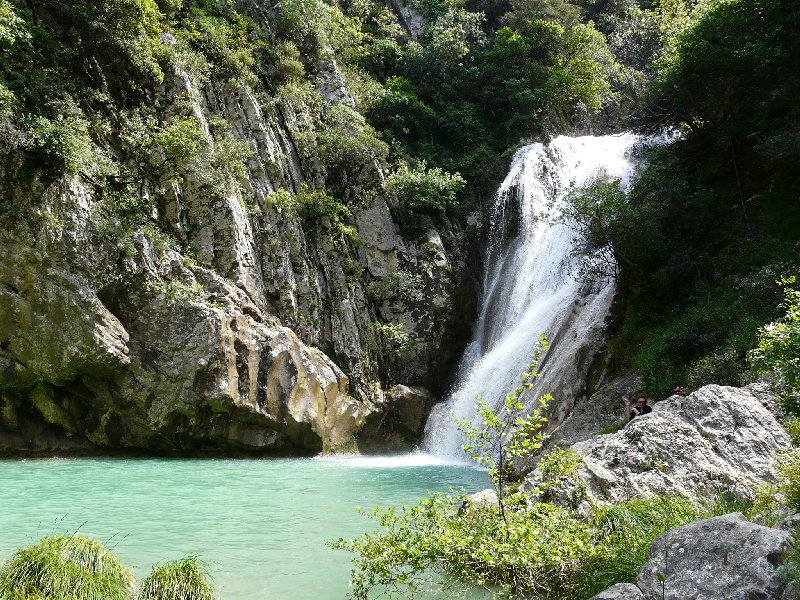 POLILIMNIO WATERFALLS - 28KM
Often described as a Greek paradise, the Polilimnio Waterfalls in Polilimnio Gorge offer something different from Messenia's usual beaches. Visitors are immersed in a scene of lush greenery, gushing cascades, and green lakes filled with fresh-water crabs perfect for a relaxing dip. And if you're adventurous, cliff diving is also an option at the highest and deepest of the pools. The hike to the Polilimnio Waterfalls takes about an hour and a half, with the trailhead beginning in Haravgi Village. Follow the paved road until it turns into dirt and you'll eventually come to a car park at the start of the trail.

ANCIENT MESSINI- 77 KM
Most of the area of Ancient Messene contains the ruins of the large classical city-state of Messene refounded by Epaminondas in 369 BC, after the battle of Leuctra and the first Theban invasion of the Peloponnese. Currently the substantial ruins are a major historical attraction. Much of it has been archaeologically excavated and partly restored or preserved for study and public viewing, as well as for various events.